In this post, we are going to discuss why should focus on effective and science-backed dog training methods as we explained already in our brain training for dogs review.

Following the airing of the “dog whisperer” on national geography around 2004, Cesar Milan became almost a household name among dog lovers.

Many celebrated the migrant turned top dog trainer in the country.

His rise – and of course apparent success- brought him under the microscope of other revered dog trainers and even top veterinary professionals.

Upon scrutiny of his works, many puppy whisperers criticized and to some extent, denounced the technique Mr. Millan employed in his works.

One of such critiques was Paul Owens. A man who prides himself on being the real – original- dog whisperer.

And to be fair, many people who are familiar with his training methods think he really is a serious force to reckon within the industry.

As such, we thought it would be fair to digest the interview he gave distancing himself from what he called cruel and unacceptable methods Mr. Cesar Milan uses to control and guide the behaviors of dogs.

Below is the question that was put to Mr. Paul Owens:

And here was his reply; 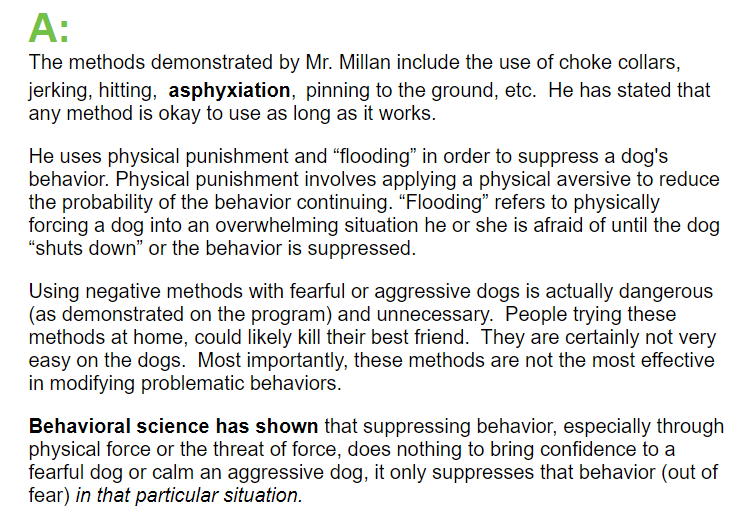 As we can see from his fascinating interview, Paul is no big fan of correcting aggressive and other wayward characters in pets with equally aggressive techniques.

2. Physical Punishment or as some put it positive punishment

As explained in the interview, flooding is quite a terrifying thing to put a dog or animal or even a human through.

you are basically and deliberately exposing your best friend – just imagine that? – to a situation you know he or she dislikes and derides intensely until the unwanted behavior is gone.

An educator for dog trainers and a veterinary behaviorist, Mr. Andrew Luescher has a very interesting analogy for this.

He likens using flooding to shut down animals to treating arachnophobia in humans by forcing them into closets, unleashing spiders into the closet, and locking them there until they stop their reactions.

physical punishment, on the other hand, is resorting to a physical aversive to cut off the continuity of the unwanted behavior.

In plain words, you are punishing the animals to correct them.

As you can see, both techniques are hugely disturbing.

For one, using them will not in any way cure or root out the underlying problem. you only suppress the problem.

Two, for a technique such as physical punishment to work, you much really know what you are doing. There are countless conditions you must meet to be able to pull this off successfully.

And it remains the fact that the vast majority of dog owners can’t do this at home.

And guess what? even the show constantly reminded people not to try those methods at home.

Why? it is simple. You might end up doing serious harm to your pets. You can even lose your pal in the process.

It is that critical and serious.

Despite the numerous risks involved in these techniques, many studies have proven they aren’t even necessary. Their effectiveness is limited.

why use cruel and unpleasant techniques when polite, humane, kind, and pleasant methods are most effective and almost risk-free?

It is not surprising that so many professionals have ditched them in favor of more positive behavior modification programs.

As Mr. Owen pointed out, he himself used to use some of these techniques. but as he became aware of their risks and shortcomings, he switched to only positive training models.

Since they are safe and more effective both in the immediate and long term future.

He concluded the interview by urging people with dogs to only hire trainers who know their stuff. You should definitely learn about the models and methods they use before engaging them.

Due diligence has no substitute here.

If you want the best for your dogs, you can not afford to use anything harmful to them.

All in all, we side with Mr. Owens on this matter. His position seems to be the most reasonable and acceptable.

And it is worth pointing out that he is not the only one who had serious concerns about the show.

So many other dog trainers, veterinary professionals, and even dog owners expressed similar sentiments.

Some even question some of the theories put forward by Mr. Milan in the show. Like the issue of dominance.

The version put out in the show has been discredited many times.

We did justice to this myth here.

For now, we hope you took something out of this. And moving forward, we are more than confident that your go-to methods will be positive and kind techniques.

We trust you would.

This article in the New York Times

And This piece from SFGATE