How To Stop A Dog From Whining

A whining dog can make you go nuts. Even if you truly love the dog. It is one of the nightmares dog owners never want to encounter. Talk less of dealing with it.

Unfortunately, it is very common among dogs. It is one of the behavior problems you will have to deal with.

And disturbingly, it can feel like there's no solution to this annoying behavior.

Well, here is good news for you:

There is a “cure” for this. And it isn't a complicated one. Below we will outline all the possible reasons why your dog whines.

And importantly, we will layout in detail how you can effectively stop it in each scenario.

Reasons why dogs whine and how to deal with it effectively in each case.

Before we proceed to list these reasons, we must first understand something critical about a dog’s whining.

Whining is one of the most effective ways puppies use to communicate with their mothers.

Puppies are born unable to hear or see. They whine in this state to tell their mums their needs and wants. Such as when they need or food or want their temperatures regulated.

Their mothers will tolerate this. And respond positively and give them the food or warmth they crave.

But as they grow enough to be able to see and hear, the mother starts to ignore the whines. And over time it stops.

Understanding this will make things very easy for you when you want to stop your dog from whining.

Not all whining may be due to behavior problems. As we just saw above, they can arise as a result of real and legitimate needs.

A dog may whine for real need. He may also whine just to seek attention. It is important to decipher the situation before attempting to solve it.

If you do not, you risk either reinforcing a negative behavior or ignoring the real need of your dog and thereby exacerbating the problem.

The moment your dog starts whining, the first thing you should do is to rule out pain or discomfort. If not, you will have a hard time stopping the behavior.

If the dog is in pain or discomfort and you do not approach him with that in mind, then no matter what you do, the dog will not respond.

The pain will increase and he whines more.

So how do you know a dog is whining as a result of pain or discomfort in the body?

This can be tricky as canines can be stoic. You need to exercise critical judgments here.

If the whining starts all a sudden without any apparent cause, you should think of pain here.  Especially if the dog is whining while submissively lying down.

In such a situation, you might observe that the dog hardly attempts to engage you.

If you suspect pain is involved, do not hesitate to talk with your vet for the necessary treatment.  Not treating the pain rightly will only compound the pain for the dog. Stress it more. And may increase the whining.

If your vet can't seem to diagnose the situation, do not shy away from discussing with him the use of non-steroidal anti-inflammatory drugs as a diagnostic test.

Before you say "Nah, I will never use NSIAD on my dog",

Let me explain why should be considering it in this case.

I understand the concerns people may have with the use of NSAIDs for dogs. Yes, they could lead to liver and kidney problems.

But it is important to also note that the likelihood of these unwanted side effects is very low. Extremely low. Almost a 0.02 percent chance of it happening.

you are making this decision in consultation with your vet. They will likely access the benefit and risks for you.

Sometimes the pain in your dog could be so severe that you might even end up thinking about euthanizing him or her. In this case, using NSAIDs to diagnose the pain wouldn't be that bad.

These medications have proven to be lifesavers for so many pets.

Always consult your vet first before you give your dog any medication.

2. Stress and or Anxiety

Many dogs whine when they are stressed or anxious. More often than not, this sort of crying of dog – stress-induced whining- is followed by appeasement gestures.

While whining, they act in a way that suggests they do not mean harm and want to be approached in a friendly manner.

Dogs crying due to stress will:

Fear may also cause dogs to whine.

Sometimes dogs get frightened by things they shouldn't be afraid of. Do not force the dog to face that thing immediately.

Modify the dog's behavior until he understands that there's nothing to fear about that thing.

Anxiety in dogs is also a big trigger of whining.

Dogs can easily become anxious as a result of isolation or separation.

This is where brain training for dogs exercises and games come in handy. I highly recommend them. They can calm your anxious dog. And may even help you eliminate whining completely

Learn How You Can Master in this best online training for dogs course.

Excitement is technically another form of stress. Though a good one. Dogs whine when they get excited.

It is not hard to spot this sort of whining.

They do lots of energy activities in this mood. Excitement whining usually doesn't call for concern

But if it has become a problem for you, you can reduce or even prevent it totally by distracting the dog.

If your dog whines when you about to enter the house, turn your back towards him or toss him a toy to play with.

4. When they want something

And can't seem to get it: Frustration

This is another scenario you must act with utmost care. You can easily positively reinforce bad behavior here.

Try as much as you can to figure out the things your dog may be scared of.

Make a list of them and try to guess when the frustrations usually set in. Doing this will save you a ton of hustle.

By knowing when your dog is about to whine because of frustration for not getting what he wants, You can easily preempt the behavior by directing their energy and attention to something else.

This will help keep them busy until they can get what the thing they yearn for.

5. To alert you to something

Dogs may cry just to alert us to events.

They can whine to tell us a criminal is entering our house (something important) or a harmless hen is passing by (something very trivial).

The moment you realize your dog is alerting you to the latter (something trivial),

You can call him over and give him some treats. Or offer praise. Do this several times.

This will make the dog come to you after a few whines rather than concentrate on trivial things and whine forever in similar situations.

This is the worse form of whining.

It is also another instance where you can easily reward a dog for negative behaviors and there reinforcing it.

If a dog is crying solely to get your attention, then ignore him. You need to hold your grounds here.

Do not give in too early.

Do not give the dog what he wants until he behaves well. Ensure you only reward and praise when he is calm.

Do not toss out a treat in the middle of attention-seeking whining. This would only encourage the dog to whine every time it wants something.

in the past, at the puppy stage, whining worked for them.

They used it to get what they wanted. Until the mother stopped paying attention to their whining. Because it was no longer necessary.

You need to teach your dog he doesn’t have to whine to get attention. Ignore that attention-seeking whining. If not, your troubles will only keep multiplying.

Any form of attention could reinforce the behavior in this scenario.

Even common yelling can be interpreted as attention by the dog and make it whine more. 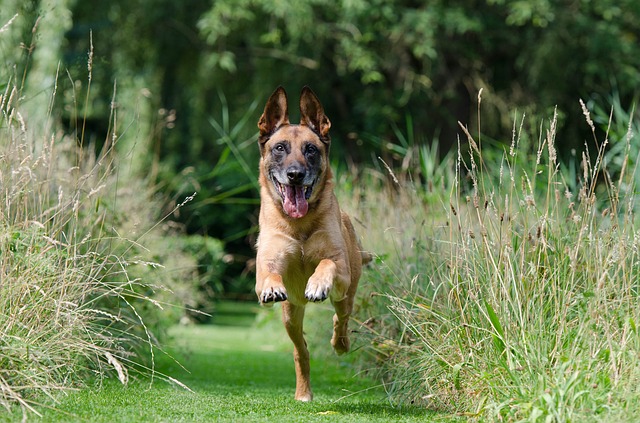 Some dogs whine because of pent up energy. Due to lack of activity or boredom.

Instead of allowing this energy to be used on whining, why not channel it into productive behaviors like Exercise.

The benefits of exercise for dogs are well known. I have no intention of repeating them here.

In addition to these benefits, exercise will help keep the dog calm and quiet.

This is especially useful for dogs who whine due to anxiety.

It also makes the dog happy. Cardiovascular exercise produces endorphins in dogs too.

You remember the effects of the feel-good hormone. Right?

can also help calm the dog and reduce the possibility of unnecessary cries.

3. Reward Calm and Quite Behavior;

Make sure you reward the dog when he is calm. Offer praise and give treats when it is not whining and is quiet.

By offering rewards, you are training your dog to keep on behaving well.

Do not underestimate the mental capacity of dogs. They are smart enough to understand this. Even those who whine annoyingly.

Whining is a form of communication for a dog.

We must listen carefully to what's happening before taking any action.

Because sometimes the line between whining for genuine reasons and whining for attention can be very blurred.

As we stated above:

Always ensure pain or discomfort isn't why your dog is whining.

If you punish a dog for whining without actually understanding the reason, you will be complicating matters for yourself and the dog.

If you were in stress and get scolded for being in stress, I don't think you will be grateful to the person who scolded you without trying to understand you first.

So do not yell at a dog who's in stress. It will only add more stress. And possibly more whining and barking.

As for attention-seeking yelling, do not tolerate this. No matter how cute your puppy is.

If you don't hold your grounds and give in too early, you will be dealing with whining forever.

A Dog will whine for attention.

Because when they were young, it used to work for them. It is up to you to teach them they no longer have to whine to get what they want.

They must behave well first. This is non-negotiable.

It is okay to discuss using NSAIDs with your vet. Your dog may need them.

The benefits could far outweigh the risk in your scenario. Especially for dogs who suffer from arthritis and similar painful conditions.

1.Why is my dog whining all the time?

If your puppy whines all time without a known cause, call in the vet. Pain is likely the culprit.

2. Do dogs grow out of whining?

Naturally, after weaning, puppies are expected to stop using whining as a means of getting what they want. If your dog doesn’t seem to grow out of whining, you need to review how you train and relate with him.